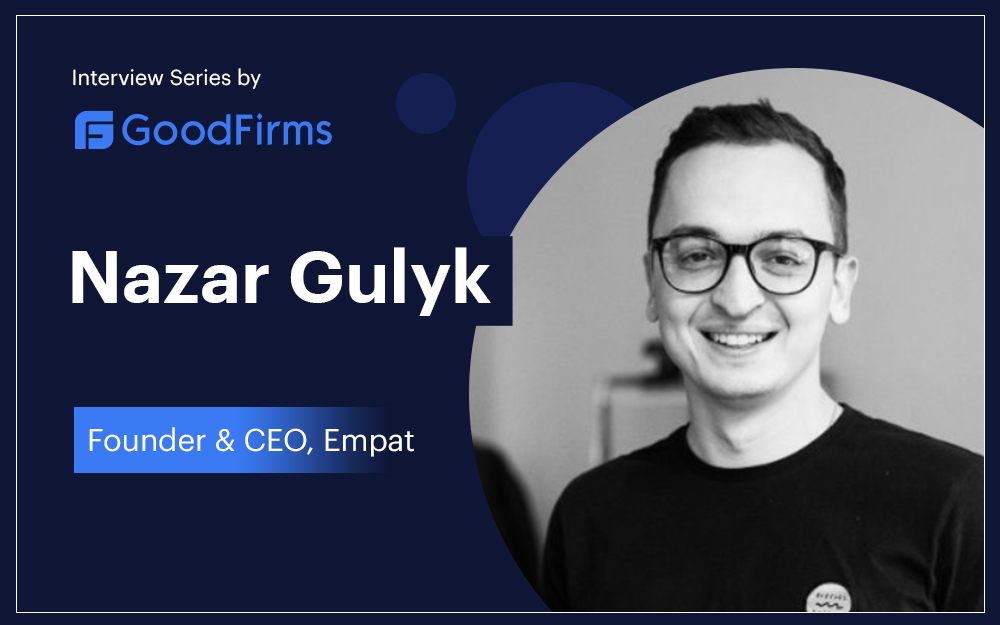 Team GoodFirms had the opportunity to communicate with the company’s Founder and CEO, Nazar Gulyk, and discuss his service offerings and how he envisions positioning his company in the future.

As a studio’s co-owner and primary account manager, in the next five years, Mr. Gulyk founded three startups in various industries, out of which two got failed, and the other one was sold out. Finally, in 2018, the teams of three startups and a web studio were brought together to form Empat. Two years later, in 2021, the startup studio Empat was launched. Still, due to Russia’s extensive war against Ukraine and the focus on the Ukrainian market, the company decided to stop investing in projects in 2022. Presently, Empat is working at a service outsourcing company.

When inquired about the company’s business model, Mr. Gulyk stated that all 56 employees work in-house. Further, the team possesses low turnover, and the average contract is 4-5 years with the developers. He added that hiring freelancers increases the risk of quality and delivery for both company and clients.

Mr. Gulyk also mentioned how his company differentiates itself from the competition by hiring only those with experience working in startups or co-founders with project experience. Consequently, Empat serves as a highly organized agency that involves people of creative minds, which becomes its strongest suit.

On asking Mr. Gulyk about the industries his company caters to, he stated Healthcare, FinTech, EdTech, and social media are some of the major industries. Since 2014, some clients have been working with the company, and almost 70% of new projects come from existing clients or recommendations.

Mr. Gulyk continued that clients mostly approach Empat for mobile apps, the developed apps are flourishing in the US market, and the clients’ MVPs (Minimum viable product) have received 25+investments.

In discussing the support system offered by Empat to cater to the queries and issues of the clients, Mr. Gulyk explained that the managers are assigned to each client. Through communication channels, these managers are conveniently made available to valued clients. Additionally, the company provides two months of project support after completing the project.

While talking about the payment structure to bill the clients, the CEO expressed that the billing system is determined by the project, typically monthly billing in the time and materials format, and the clients approve at the beginning of the month. The company takes projects that meet the essential budget requirement, starting at $5,000. In 2021, the price range of the projects that the company has worked on was 10.000$-800.000$.

While concluding the interview, when Team GoodFirms questioned Mr. Gulyk about where he sees his company in the future, he stated that the company wishes to help the clients in launching more than 50 new projects, attract more than $5 billion in investments, and have a total audience of 1 billion users across all the projects.

Feel free to go through the entire interview of Empat’s CEO, Mr. Nazar Gulyk, on the GoodFirms website.

Washington, D.C.-based GoodFirms is an innovative B2B Research and Reviews Company that extensively combes the market to find business services agencies amongst many other technology firms that offer the best services to their customers. GoodFirms' extensive research process ranks the companies, boosts their online reputation, and helps service seekers pick the right technology partner that meets their business needs.

Working as a Content Writer at GoodFirms, Anna Stark bridges the gap between service seekers and service providers. Anna's dominant role is to figure out company achievements and critical attributes and put them into words. She strongly believes in the charm of words and leverages new approaches that work, including new concepts that enhance the firm's identity.